What is Haptic Art?
HapticArt is a brand new urban communication system, that allows to create infinite forms of global realtime visual art by a simple touch, using art as the language of global communication.


How did we come up with the idea of Haptic Art creation?
We were attached to two main ideas - haptic technology and online technologies’ usage to make people go more offline. After many discussions and immersive brainstorming process we decided to make new technology that allows people to communicate in the language everyone understands - art! 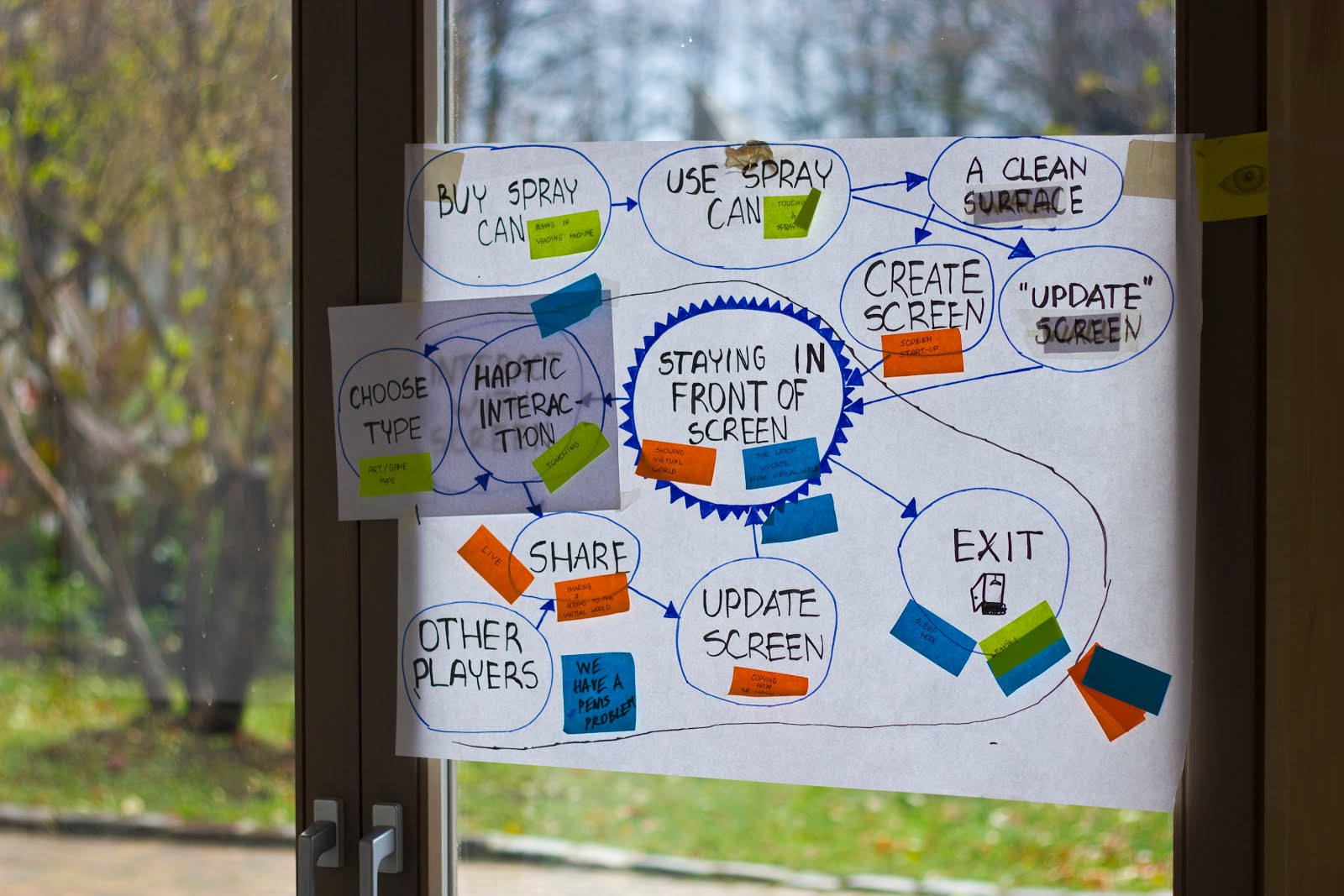 
Finally, the concept:
By using a can of spraypaint, containing Smart Dust, users are able to make an interactive screen on any surface.
The possible applications for this technology are wide - it could be used to present art, playing games, education, social programmes, communication, government issues, etc.
Our project is all about global interaction between different cultures and a rise in the amount of urban art, creativity, grafitti awareness. This is a new tool for urban visual artists which helps to create more interactive artworks and projects, causing less visual and aesthetic damage.
Modern art museums could be interested in having some screens to bring urban art to the gallery, keeping the flow of street art concentrated in one space too.


The working process:
The user uses the can of special spray to paint a surface with Smart Dust. This special technology consists of several tiny chips that produce colors, like pixels. Thus, a screen is created. Onwards, the user has to start up this screen by lining out the screensize, this is done with the touch. All interactions with the screen are done through the haptic technology.
Now the screen is created and started up, so it provides user with the opportunity to add whatever he or she wants to an artwork.
Whenever a user activates a screen and want to add to a artwork, the screen will show the latest (updated) version of the artwork. This artwork is retrieved from cyberspace, it’s like the screen acts as a window into a virtual room containing the art work. The user can than add anything to this artwork and when he is satisfied with his work he can share the artwork. When this happens, the artwork in the virtual room is updated automatically. When another user from anywhere on the planet wants to add anything to the artwork, he also gets linked to this virtual room (like looking through a window). But the artwork now looks in a way the previous user left it. This means that every virtual room can only have one user at any time, because there is only one window. Therefore, there are many different virtual rooms, each with it’s own artwork.


Visualized version of the process: 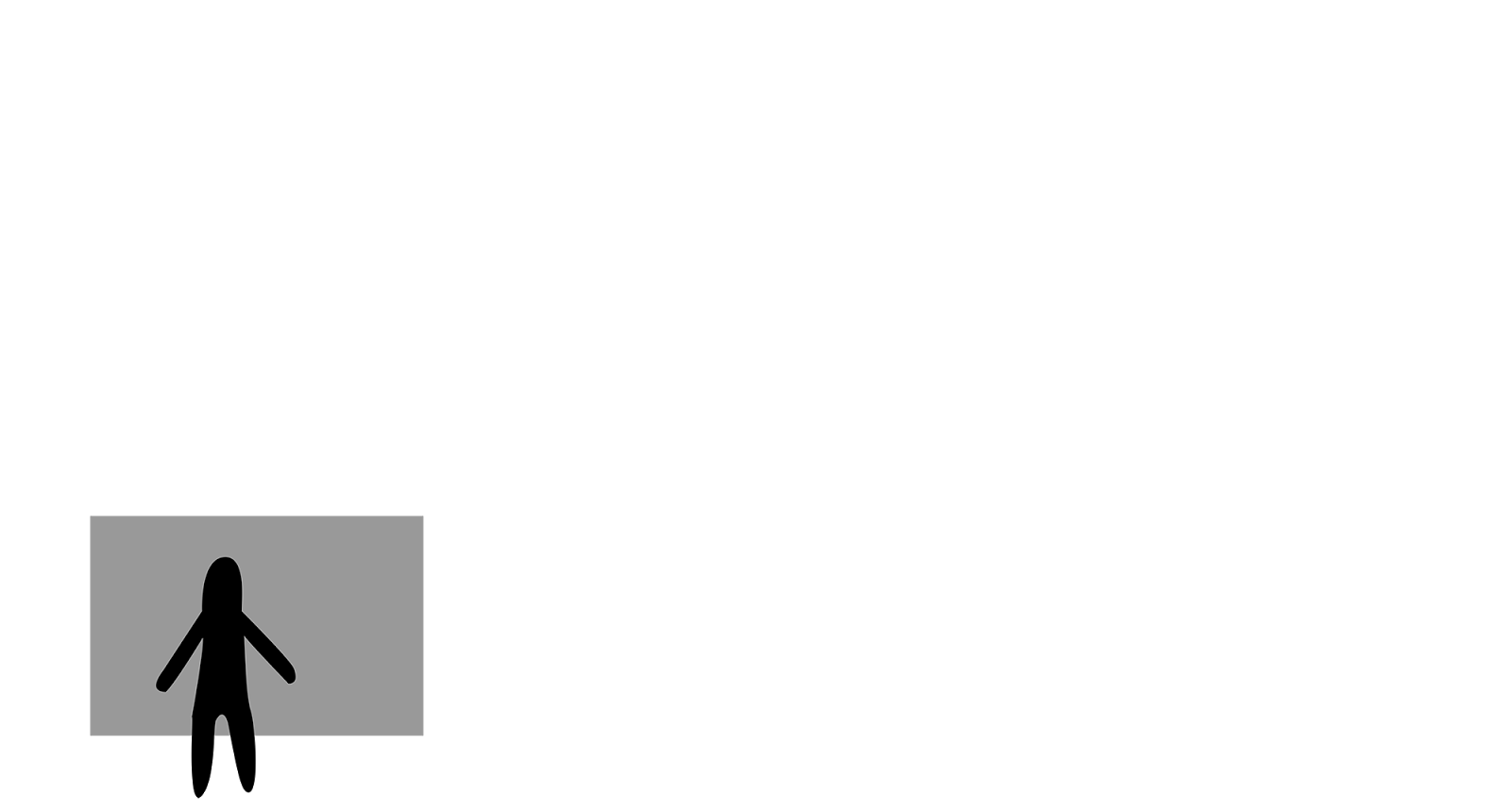 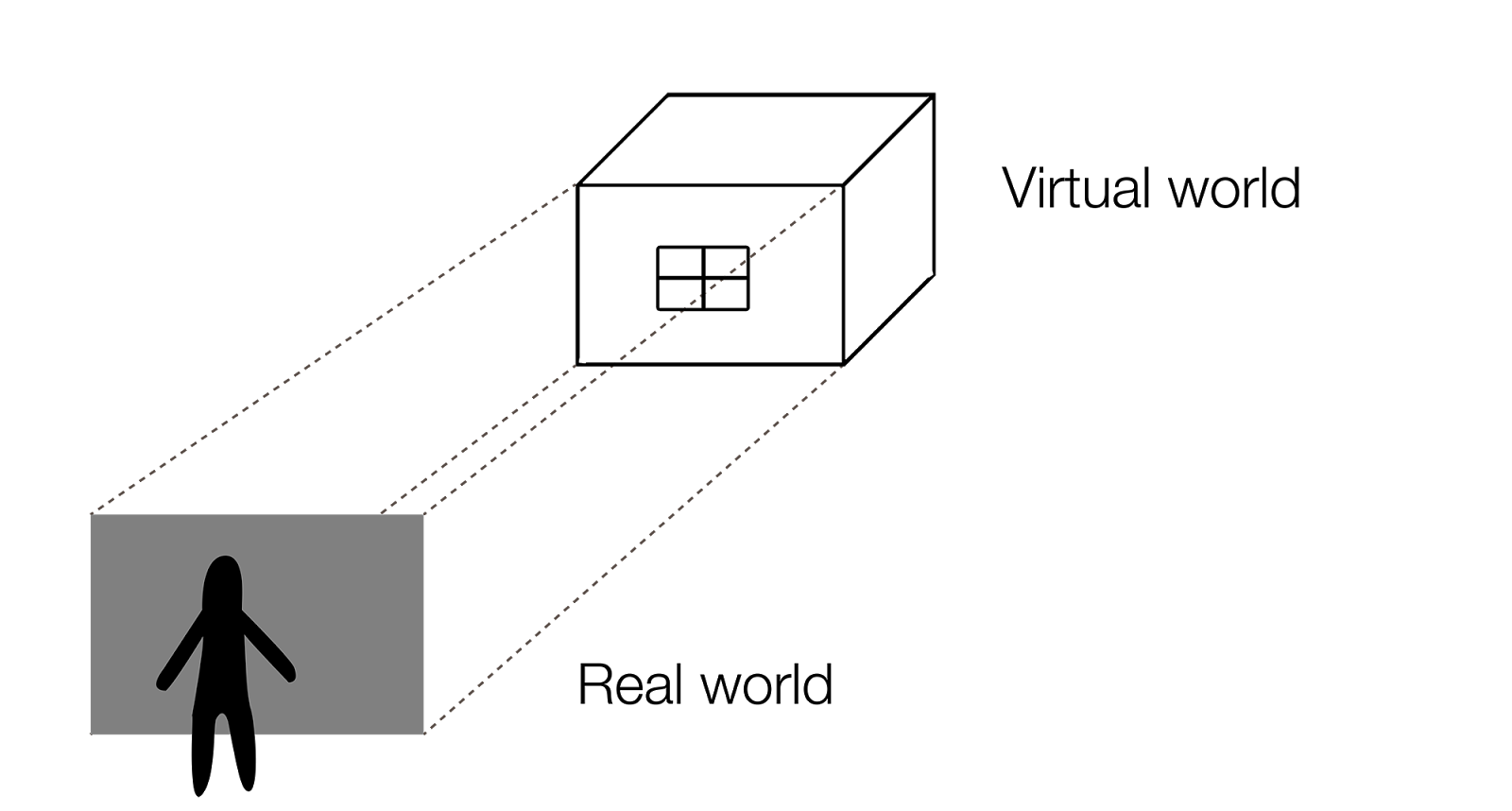 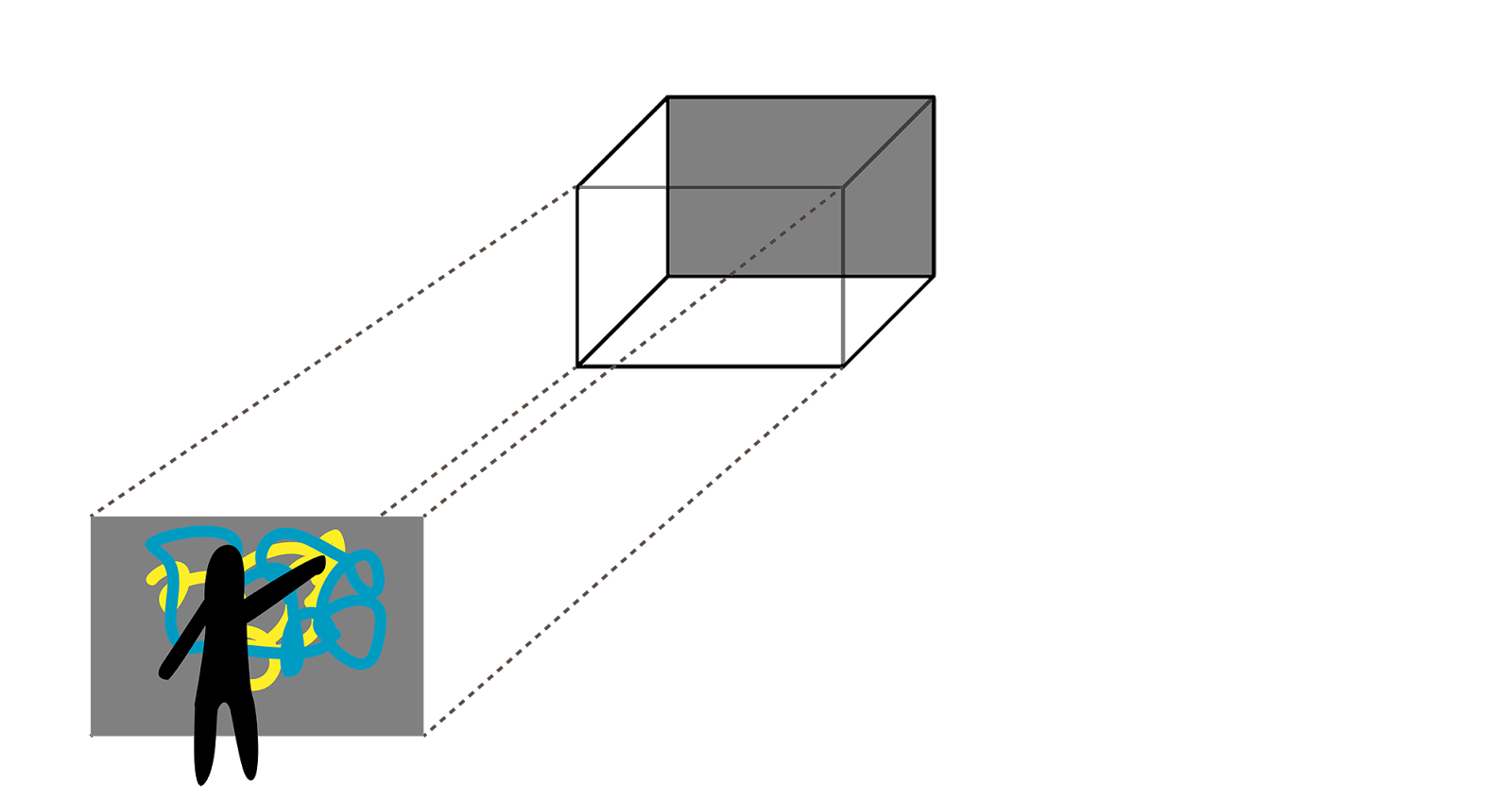 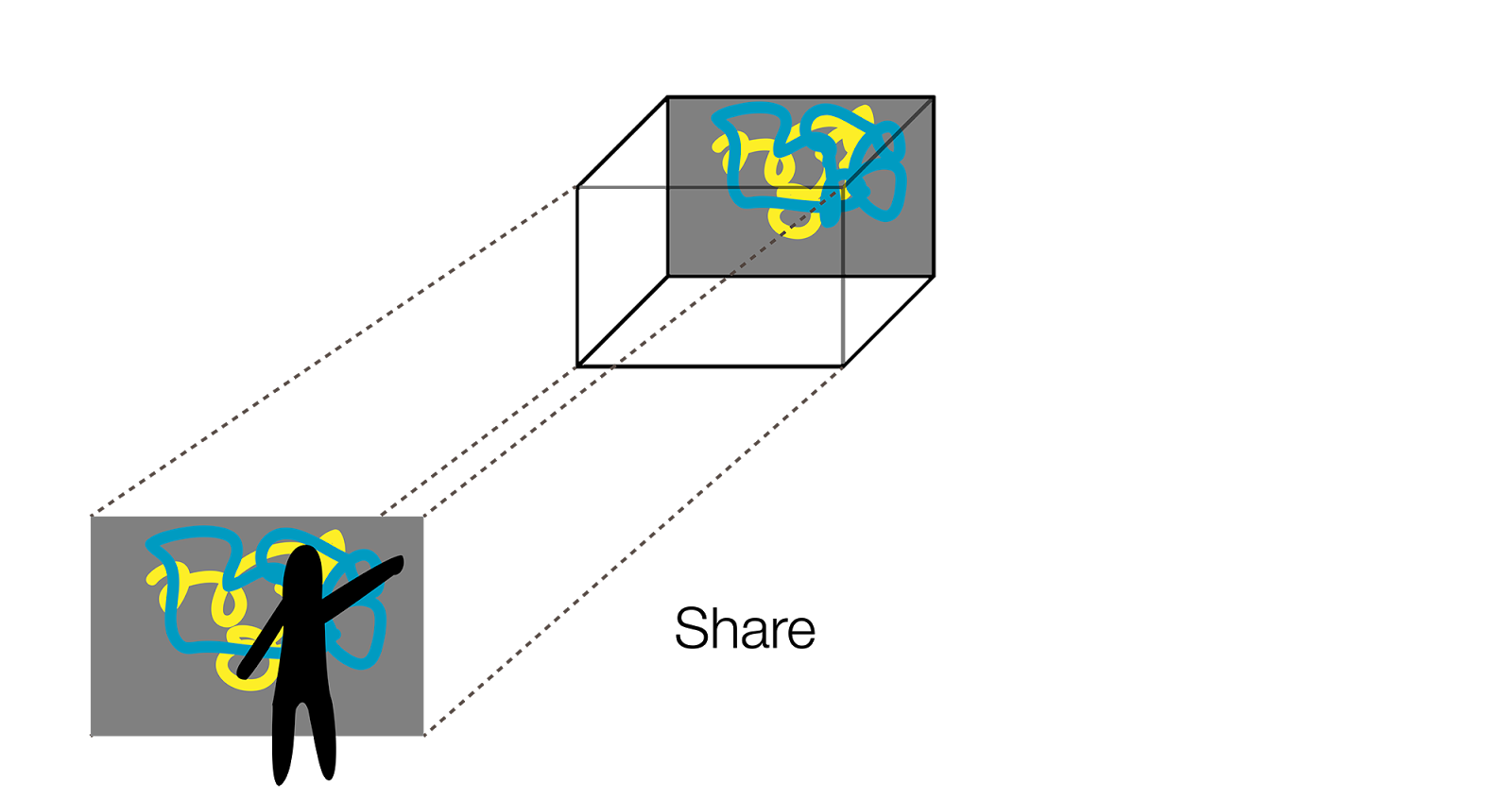 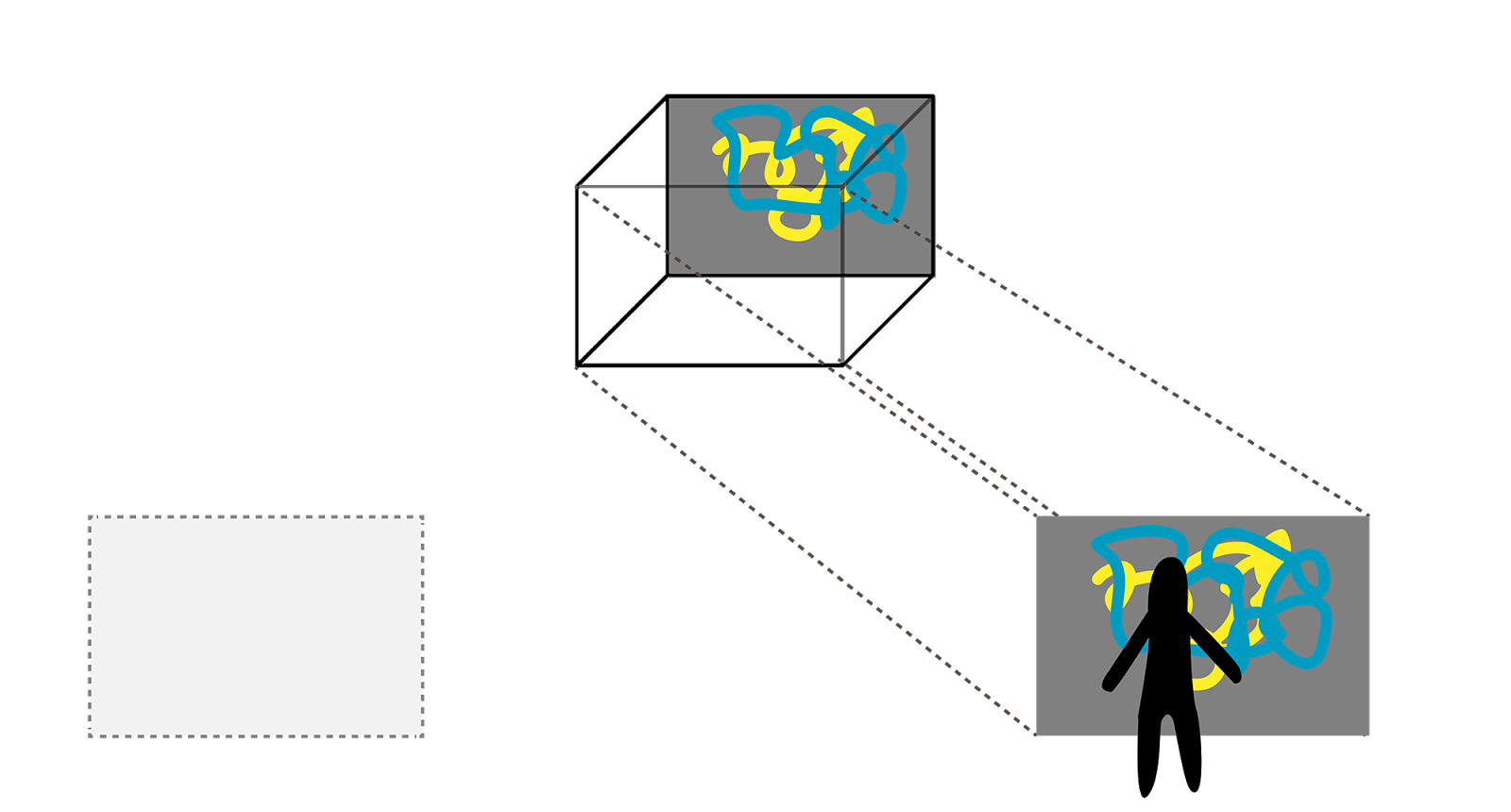 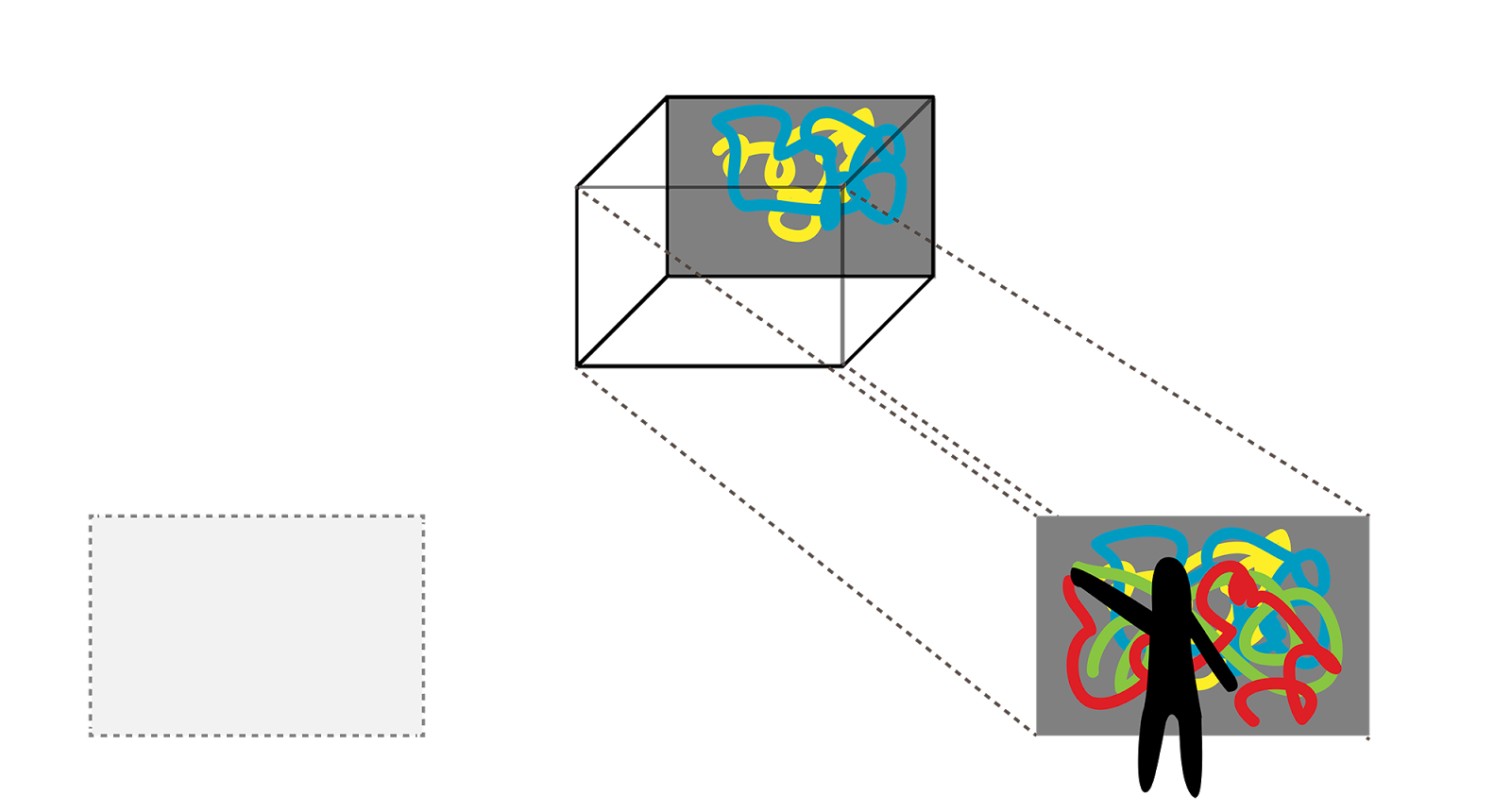 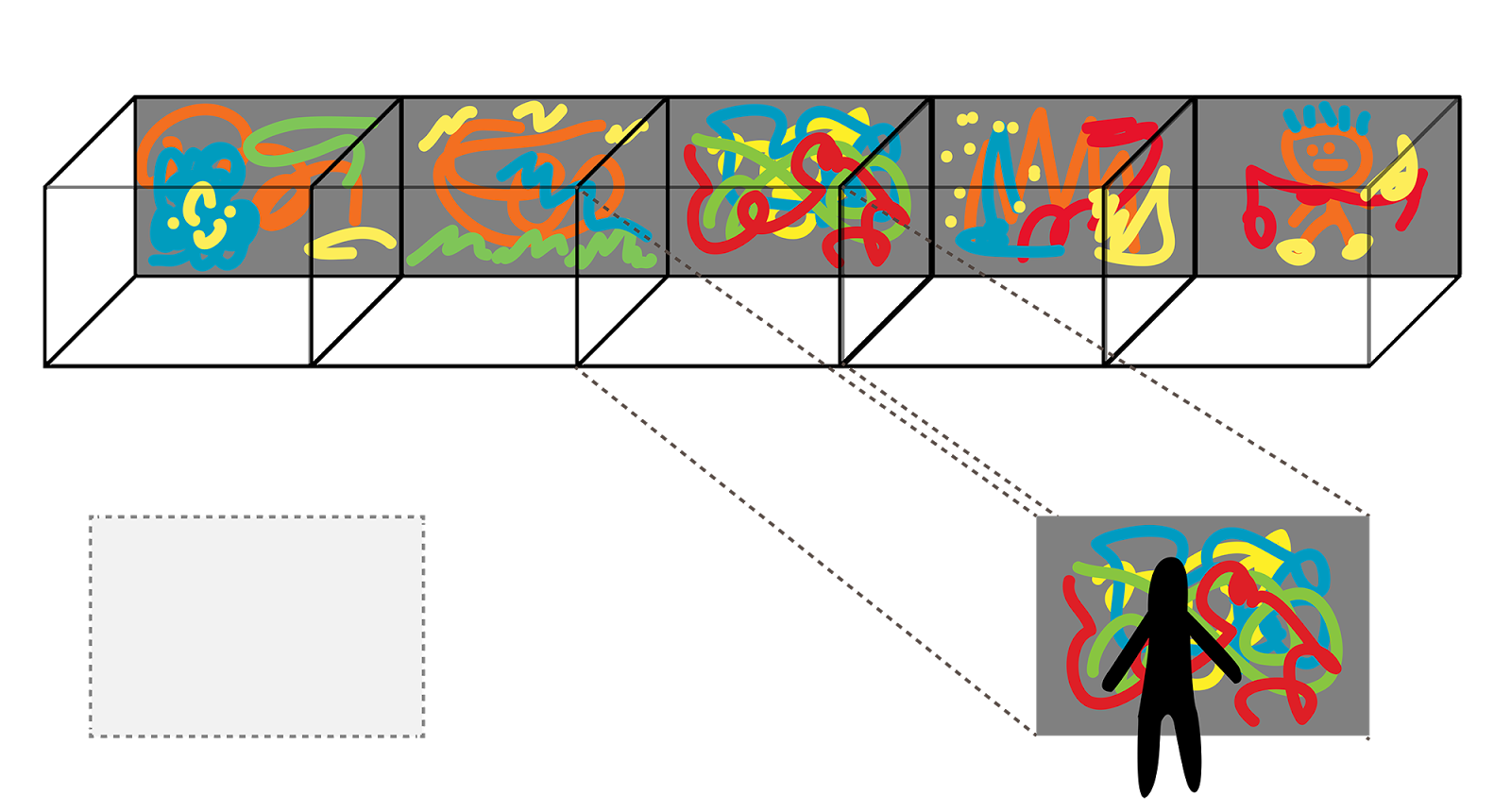 FEEDBACK:
The feedback statement to the team presented by René Lansink in the feedback discussion, last day plenary:

Project 5 Haptic Art
This project with the tagline ‘Spray it, Play it’ has works with the premise that everyone is an artist. Using a special ‘spray can’ the user can ‘define’ a virtual ‘canvas’ in a public space. On this virtual canvas the user can use a virtual brush and paint menu for creating virtual graffiti by making gestures. The images can be saved, transported to another virtual canvas on a different location or stored on a website were all the works of art are collected.

The concept of the project was visualized clearly in an animated video. The exact material qualities of the ‘spray-medium’ used to display the canvas however remained a bit of a mystery…as well as the devices necessary to ‘see’ the virtual graffiti. Also the more or less ‘subversive’ nature of graffiti art was basically ‘neutralized’ by using this technology.

Challenging however remains the idea to define a ‘virtual window’ in a ‘real space’ by other means than using a physical display.

Summary of comments by other lecturers
Was the design process democratic? Maybe is needed some thinking about the group work. Some members of the group think the product is not the most interesting to develop. We could see the process of your group on the presentation.

The visualization was the best part of it.

It wasn't clear if you decided to work in one thing, it became vague. Too much talking instead of a demo presentation. It looks you need to make a lot of decisions in your project. Simple facts were needed, it wasn't clear to understand. The music didn't fit in the video. Can this compete with augmented reality? Because it does the same but has lots of limitations, it is still something physical. Who is the audience for this is not clear yet, as does not really fit with ideology of street artists. The presentation was weird because of several people standing in front but almost only one person is talking.

Posted by Unknown at 3:03 PM No comments:

This project has been funded with support from the European Commission. This communication reflects the views only of the author, and the Commission cannot be held responsible for any use which may be made of the information contained therein.

In Finland the Erasmus Programme is administrated and executed by CIMO, the expert and service organisation of mobility and cooperation.